After install the Fix pack 7 (FP7) i also installed the Tm1 Turbo Debugger Tool as said it in https://developer.ibm.com/recipes/tutor ... -debugger/

Now I can add break points when executing TI Processes and it works ok, but the problem is I can not visualize all the code lines in the prolog, Data or Epilog. it is always incomplete. For example: 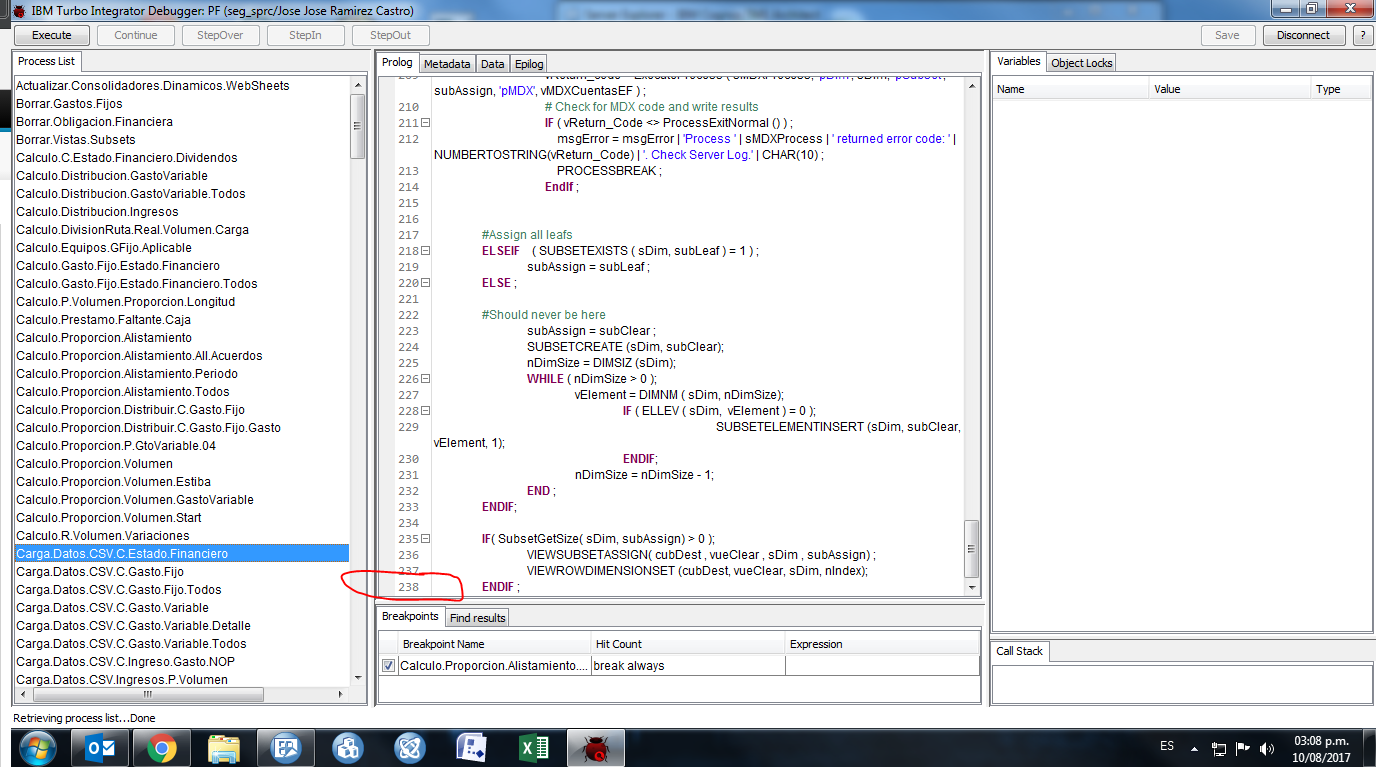 It only shows me until line 238 but the prolog has 22 lines more. (it happens with every process with different number of lines)
maybe something is missing in configuration file? or did i make a mistake in installation process?

I am pretty new using TI Process and TurboDebugger so many thanks in advanced.
Top

I face the same problem but did not spend time on it because that debugger is still new. It would be good if we could reach a solution, maybe with IBM involvement.
Best regards,

Thank you so much for your answer Mr. Gielis.
Top

The debugger is fantastic, however I am have the same problem with the missing lines of code. It does not consistently occur, ie it does not depend on the number of lines as it impacts both small and large TIs. The same TI will sometimes show all lines and sometimes not.

I have raised this as issue with IBM unfortunately here is the answer.

Just a quick note to let you know that IBM Cognos Support Management
have confirmed my suspicions; As this code is community sourced, it is
not supported by IBM, and any requestes for support for the
TurboIntegrator Debugger utility will therefore need to be directed to
the person(s) who developed it - You may be able to reach this person
via the Comments secttion on the DeveloperWorks Recipes page at: https:/
/developer.ibm.com/recipes/tutorials/ibm-tm1-turbointegrator-debugger/ <
https://developer.ibm.com/recipes/tutor ... rator-debu
gger/> .

I have raised the question on the IBM developer Website.
Top

Thank you for the update Peter
Best regards,

Hmmm, I suspect that the support person is speaking out of turn here.

The TI Debugger was developed by an individual in IBM, not by an external person with a desire to improve our lot.

It is also mentioned as a feature in many IBM presentations that I have attended.

It's pretty rich to then claim that as the tool was developed in some kind of off-line skunk works manner that they are not going to support it. Seems there is a bit of a grey area here...
Top

Product Offering have said that the TI debugger will become officially part of Planning Analytics Workspace and therefore officially supported, but they can't give me a timeframe of when that will happen.

With that said, Product Offering would like to look into this issue, could you please send me the TI process in question, just the .pro file will be fine. However, they aren't making any promises on resolving the issue.

I will provide an update when I hear back.

I am not 100% sure but I believe the issue is possibly related to the length of the TI line of code. I have attached a very simple TI where the 10th line (very long line of code) is not showing and then the 3000 (short) lines TI are showing OK.

The latest update from IBM


Good news, Offering Management are going to fix the issue. It's a Word wrap issue.

Very Good News. IBM have delivered the new version of TurboDebugger to address the wrapping error. From my testing this error has been fixed.
Top

But, I found some bugs and could not foreward them to IBM - please, does anyone have the chance to forward it??

(II) In jar file version of 16 Dec 2016 I found following bugs:
(1) numbers are displayed in variables tab without decimal places (0.1234 => 0 or 1234.56 => 1234).
(2) existing line breaks are not handled correctly. Result: I cannot scroll a long script to the end (bottom) of the text.
(3) UTF8 code is probably not handled correctly or not used: I lose e.g. all German umlauts (öäüÖÄÜß) when saving the TI script.
(4) If a executed line results in an error, debugging stops without message box. (If you run the script with F5 you must guess on wich line the script had a failure.)

(III) Further would be nice to have:
(1) a "Stop" button to stop the Debugger (at the moment I have to kill the debug session using TM1Top)
(2) a posibility to set my own syntax highlight colours
(3) can handle more than 1 open TI script
(4) user can move the current debug position (for re-execution of the same line, to skip lines, etc.)
Top