Significant points from the Read Me:
* They've reversed their previous policy on the In Spreadsheet Browser (ISB):

As of TM1Â® 9.5.1, In-Spreadsheet Browser (ISB) support is classified as "compatible" which provides full support of existing functionality. Exploring TM1 data in Microsoft Excel while in writeback mode is valued by IBM and continued support is planned for this functionality.

* On the other hand, Workflow is on death row but will be replaced by "alternative... functionality" in a future release.

* IE6 will be deprecated in the next major release of TM1.

From the New Features chapter:


The following features were introduced in this release.

Instructions for installing the TM1 Package Connector are found in the Installation Guide.

Personal Workspace and Sandbox Writeback Modes
IBMÂ® CognosÂ® TM1Â® offers different ways to handle the writeback of data to the server. Writeback modes can be enabled across the server, then targeted to specific user groups with the Capability Assignments interface. Administrators can set the writeback modes to offer a Personal Workspace, to allow users to create and name multiple Sandboxes, to maintain the classic TM1 direct writeback mode. See TM1 Writeback Mode and Sandboxes in the User Guide for more details.

Job Queuing
An administrator can turn on the ability to process sandbox submissions using a Job Queue. This feature allows other server work to proceed until resources are obtained for sandbox calculations. The Job Queue can be monitored and submissions can be canceled. See "Job Queuing" in the IBMÂ® CognosÂ® TM1User Guide for more details.

Persistent Feeders
Cubes with feeders can now store their feeders into a .feeders file which can be used to significantly improve cube load times. See "Persistent Feeders" in the IBMÂ® CognosÂ® TM1 Rules Guide.

Websheet and Paging
Although not a new feature, IBMÂ® CognosÂ® TM1Â® Websheet performance has been enhanced in this release:
â— Large Websheet processing has been significantly improved.
â— Paging now encompasses calculation.

This sticky will self-destruct in 30 days.
"To them, equipment failure is terrifying. To me, it’s 'Tuesday.' "
-----------
Before posting, please check the documentation, the FAQ, the Search function and FOR THE LOVE OF GLUB the Request Guidelines.
Top

Interesting? new feature - the 951 installation adds a new folder Trui, containing transui_dll.dll.
This appears to be connected with Cognos Transformer

Has anyone tried the package connector? Using Cognos DMR FM packages built over our DW might save me some lines of SQL/time to prototype things
UPDATED
TI; Unexpectedly crashes TM1 server when editing SQL with Oracle 11G client - two things to stop that from happening:
1) ODBC settings - Enable Closing Cursors option on the Application tab when configuring the DSN
2) Don't load Unicode

Just want to clarify something which I faced recently:

If you will try to install TM1 (with TM1Web) you will get an Error "Internal Error 27555". See the attached screen shot.

According to IBM support if you are on Windows 2008 then the only option is to upgrade the OS to Win 2008 R2 or to get on Win 2003. I have not tried your suggestion...who knows may be it works

Rkaif -
I also got internal error 27555 but with a different folder, C:\aspdir\TM1web\. I noticed my C: drive was amost full so I installed to another drive and it worked with no other changes.
Food for thought.
Mike
Top

Hi Rizwan
Our current Dev environment is 9.5.1 on Win 03 R2 64bit. Issues;
- Contributor; inactive web page (initialize ok, login and CA web page does nothing) - probably due to something I did or failed to do on upgrade &
- Architect; on the odd occasion, advanced rules editor crashes for no apparent reason - both in the Win 03 environment and Win 7 64 bit
Otherwise 9.5.1 performs well so far & server start up time is fast!

Also have 9.5.1 with Contributor running on my Win 7 64 laptop with no issues.

I have plans to build a fresh Dev environment in Win 08 R2 64 - will let you know how that performs. Is it running ok for you?

Once happy with Dev, it will be time to clone to Prod, integrate Cognos 8 security, deliver Contributor through the C8.4.1 portal and expose a cube built for C8 Analysis Studio users.

I don't know whether this is general knowledge or not, but apparently there is a specific procedure that you have to follow in upgrading 9.5 Contributor to version 9.5.1. (I haven't tried this, since I've yet to use Contributor.)

The details will be found here:
http://www-01.ibm.com/support/docview.w ... RXT&mync=E
"To them, equipment failure is terrifying. To me, it’s 'Tuesday.' "
-----------
Before posting, please check the documentation, the FAQ, the Search function and FOR THE LOVE OF GLUB the Request Guidelines.
Top

The Error "Internal Error 27555" with parameter 87 was only due to the incorrect Operating System. It was not related to the Disk space. Being a new server, I had Gigs of extra disk space.

The client has now upgraded to Windows 2008 R2 and I was able to install TM1 9.5.1. This is a fresh install and is not an upgrade from a previous TM1 version.

During the installation of TM1 9.5.1 on Windows 2008 R2, it was not accepting my Domain user/password and I got error "Access is denied". I then figured out that you have to start TM1 SETUP as an Administrator. Right click on the SETUP.EXE and select "Run as Administrator". 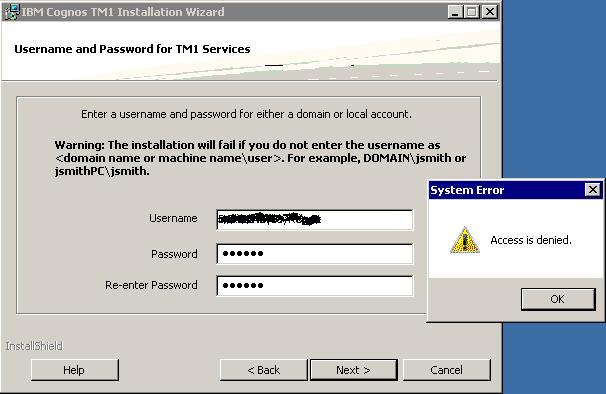 Neither the post nor the thread will be lost; it's just that it's "sticky" position at the top of the forum was set to expire in 30 days.


rkaif wrote:During the installation of TM1 9.5.1 on Windows 2008 R2, it was not accepting my Domain user/password and I got error "Access is denied". I then figured out that you have to start TM1 SETUP as an Administrator. Right click on the SETUP.EXE and select "Run as Administrator".

That's a good and sometimes overlooked point. I've found that under Vista and later era OS's (Vista, 7, Server 2008) with most productivity software at least it's wise to run the install as Administrator to avoid curious and ill-documented side effects when you go to use it. I've also found this with Visual Studio, SQL Server and some others.
"To them, equipment failure is terrifying. To me, it’s 'Tuesday.' "
-----------
Before posting, please check the documentation, the FAQ, the Search function and FOR THE LOVE OF GLUB the Request Guidelines.
Top

Thanks Alan - that's a useful guide. Sometimes it's difficult to re-initialize Contributor (can't connect to TM1 server I've taken down) or I don't want to save and import the old Contributor model but start afresh so it can be as easy to :
- run through steps 4-12 of that guide, and
- run }tp_admin_delete_all.pro in TM1 to clean out the Contributor guff
- initialize

A new document has been posted to the Proven Practices section of the IBM DeveloperWorks site. It deals with the installation of 9.5 with special mention of Contributor. It may be worthwhile taking a look at if you encounter problems with that:

http://www.ibm.com/developerworks/data/ ... ge494.html
"To them, equipment failure is terrifying. To me, it’s 'Tuesday.' "
-----------
Before posting, please check the documentation, the FAQ, the Search function and FOR THE LOVE OF GLUB the Request Guidelines.
Top

Few recommedations from my practice to avoid 27555 Internal Error:

This thread is some days old, but possible this solution help someone

TM1 Web works on Server2008, if you install the "IIS 6 Management Compatibility" in the Server Manager Web Server Role.

It seems that the forum search function must be broken again, otherwise I'm sure you would have had no issues finding this thread. Windows 7 is not a supported OS for the TM1 server software.
Kamil Arendt
Top

Hi Qml,
It is not for server but for client.

viswaraju wrote:Hi Qml,
It is not for server but for client.

Think about it a little further:

Since when does a client installation try to install TM1 Web on the machine?

Re-check your installation settings and change them so that client is all it is installing.
"To them, equipment failure is terrifying. To me, it’s 'Tuesday.' "
-----------
Before posting, please check the documentation, the FAQ, the Search function and FOR THE LOVE OF GLUB the Request Guidelines.
Top
Post Reply
21 posts